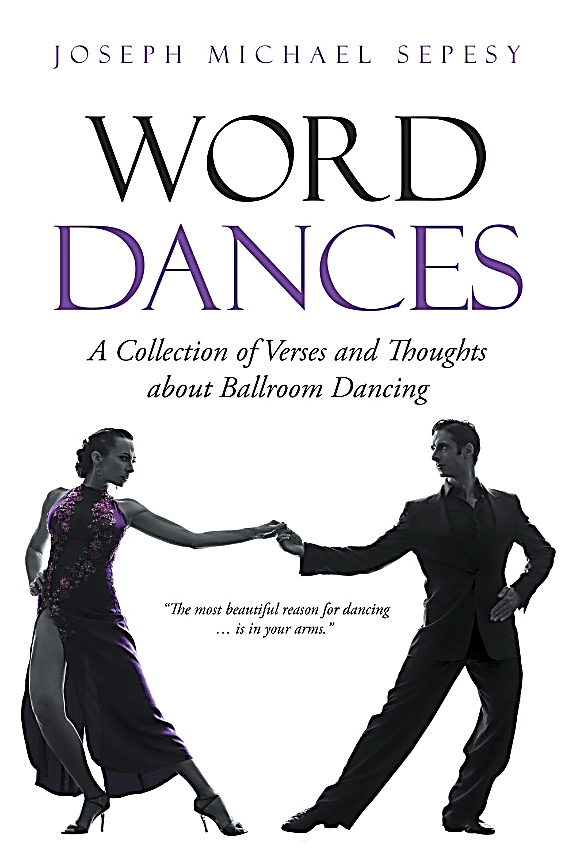 Word Dances: A Collection of Verses and Thoughts about Ballroom Dancing

Dance has been an important and transformative art in the life of author Joseph Michael Sepesy. Although he has had a love of music all his life, he only came to dance in 2009 as a step toward dealing with PTSD and as a way of doing something new in his life. That move has drastically changed his way of living, improving both his physical and mental health.

During this time, he began to write down his thoughts on dancing in the form of poems and short stories. Now, in Word Dances, he shares those verses and stories, offering reflections on and explorations of his dancing experiences and hoping to evoke similar memories in others. Aimed at beginners and seasoned dancers alike, this collection speaks to the impact that dance can have on our lives and well-being. 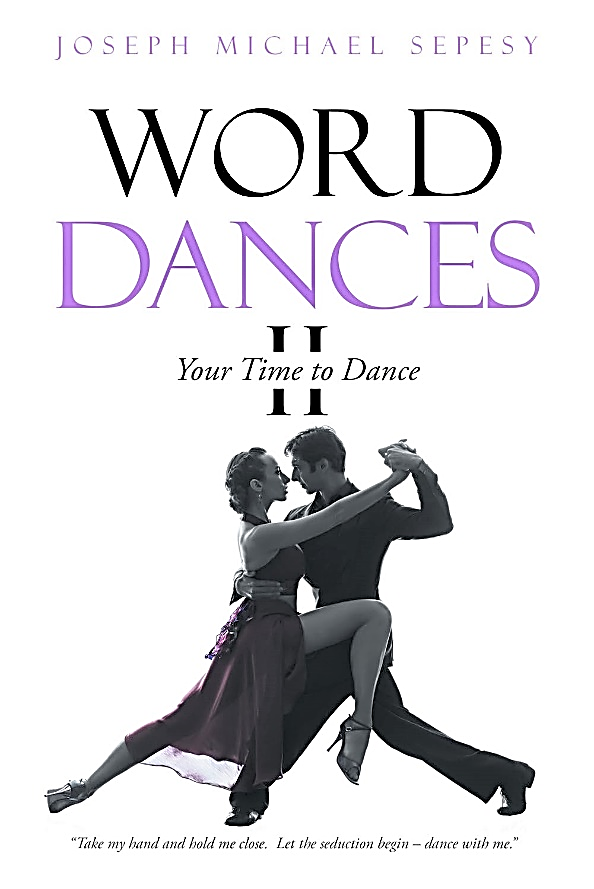 Here, in Word Dances II: Your Time to Dance , author, Joe Sepesy describes his continuing journey through the world of ballroom dancing with observations and descriptions about the learning process, dance genres, and the beauty and joy of dancing. Word Dances II, the perfect companion to Joe’s first book, Word Dances, a Collection of Verses and Thoughts about Ballroom Dancing, will inspire, guide and ease, any dancer onto the floors of social, ballroom dancing … and will introduce or reacquaint you with … your time to dance. 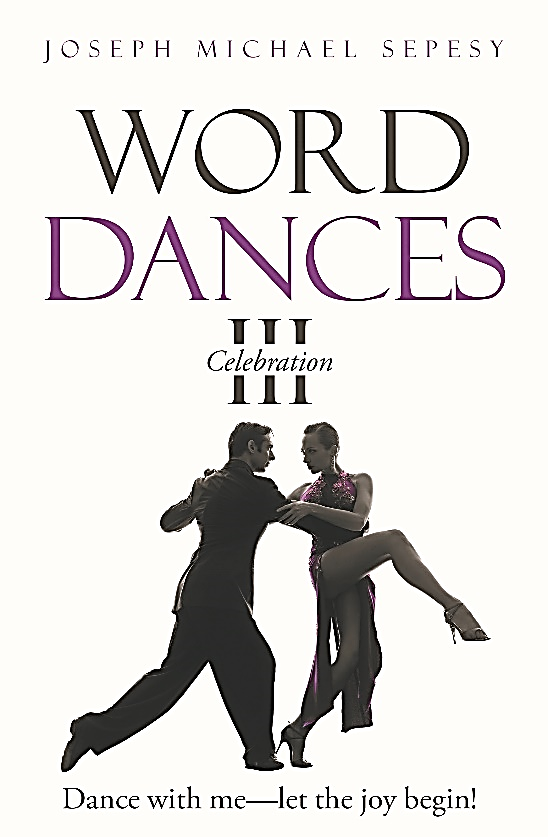 Life is a dance — celebrate it! Word Dances III: Celebration, by ballroom dancer and author Joe Sepesy, seeks to infuse your life with joy through verses and thoughts, providing inspiration to carry you onto the floor of your life for your own celebration of social ballroom dancing.

This, Joe’s third collection of writing on dance, demonstrates how his dance experiences continue to inspire, touching dancers and non-dancers alike. Explore the world of music and movement with descriptions, observations, and opinions about the joys of dancing. Take a tour of the ballroom and its classical ambiance, with a continuation of the learning process, and, of course, the dances and the music. As a bonus, enjoy the included list of more than three hundred songs with the best dance-ability for social ballroom dancing. Join in, read, and dance—create and feel your own celebration!

This collection of verses and prose, the third in a series, offers further insight into the passion of ballroom dancing. 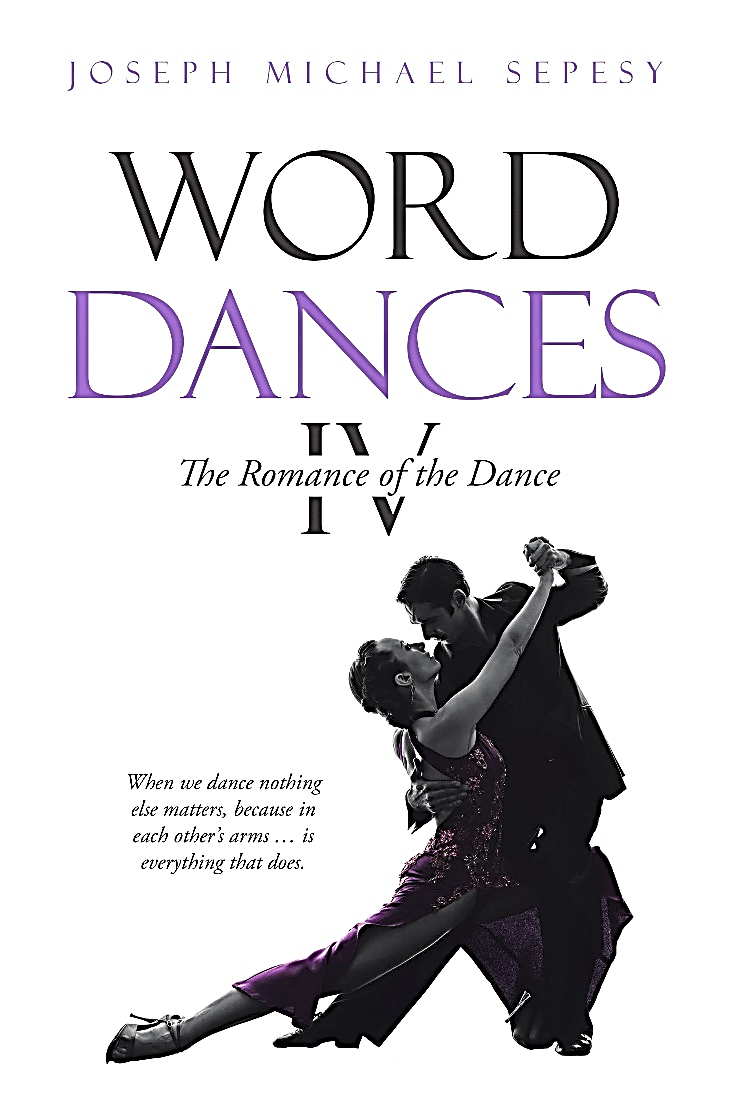 Word Dances IV: The Romance of the Dance

Joseph Michael Sepesy once again whisks us onto the dance floor in a sweeping, evocative collection of verses and reflections that use vivid descriptions and romantic imagery to encourage passion, rhythm, and connection in anyone who finds peace and happiness through dancing.

In the fourth book in his Word Dances series, Sepesy continues his exploration of social ballroom dancing and romance through the elements of the music, lyrics, and graceful movements that often prompt couples to fall in love. Within varied verse, inspirational thoughts, and anecdotes, Sepesy begins by reflecting on the serendipitous dance that often occurs as couples discover a mutual attraction. While moving through the various stages of romance and falling in love, Sepesy unearths the beauty and joy of ballroom dancing as couples embrace affection and desire. The author’s verses also include recommendations for musical selections that will enhance verse themes, moods, and of course, dancing.

Word Dances IV shares verses and reflections that explore the glorious coupling of true love and dance that is celebrated far beyond the ballroom floor. 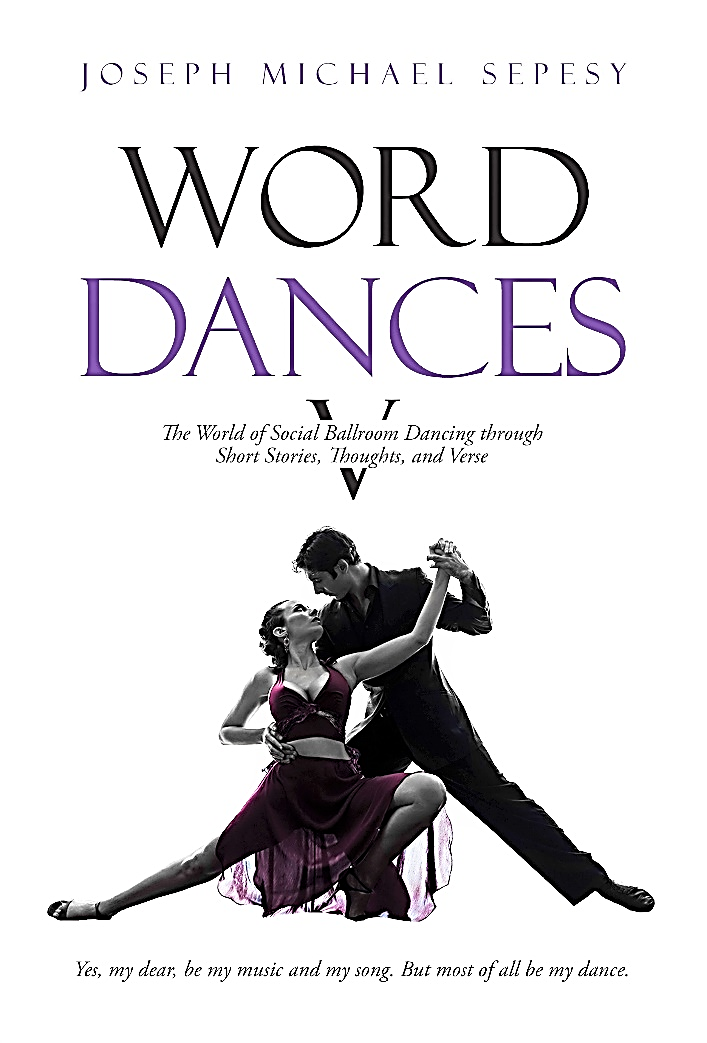 In the final installment of his Word Dances series, Joseph Sepesy concludes his narration about social ballroom dancing, a fun activity that can be mastered and enjoyed by anyone.

Through new anecdotes, verse, and references, Sepesy reflects on the genres of dance; the seductive music that beckons dancers to the floor; the learning process of dance; the romance and humor that accompanies social ballroom dancing; and the challenges he continues to face as he deals with advancing nerve damage and PTSD. With the intent of invoking smiles, he also offers epigraphs, commentary, and quotations to help dancers of all levels realize the relevancy of their own ballroom adventures. Included is a list of over four hundred songs that seduce and demand that dancers take to the floor as well as several short stories that utilize memorable characters to bring social ballroom dancing to life. 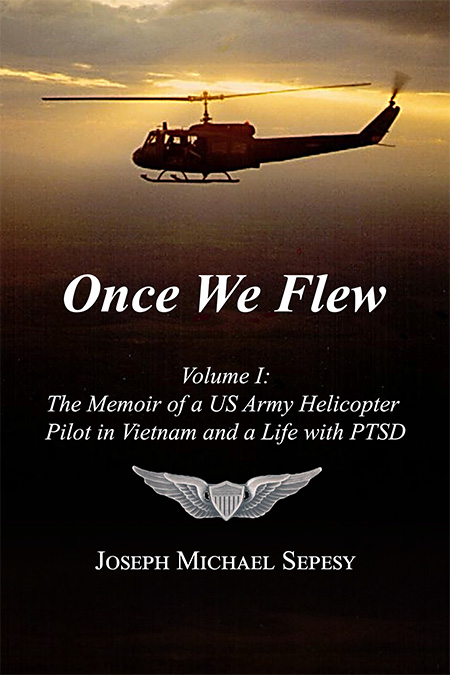 Once We Flew Volume I: The Memoir of a US Army Helicopter Pilot in Vietnam and a Life with PTSD

Joe Sepesy straps the reader in his Huey helicopter with accounts of his experiences from know-nothing new guy to aircraft commander and flight leader, with vivid descriptions of missions from his 2,200 flight hours and hundreds of combat assaults and direct-support missions.

Meet the men who served at the author’s side, in the air and on the ground; those who had faith in him and taught him how to fly and how to survive, as well as those indifferent or more interested in their self-absorbing egos.

Meet those who earned the respect of fellow soldiers, those that would later be proud to comprise Sepesy’s brave band of brothers–warrant officers with big mustaches, Seiko watches and bad attitudes. Aviators, nineteen years old, stupid and going to live forever–youths who commanded others and flew quarter-million-dollar aircraft, equipped with machine guns shooting real bullets, flying at 120 knots, nap of the earth. And, enjoy the unique, inherent humor of military life and the lighter moments of youthful pilots goofing off, their shenanigans and devil-may-care attitudes. “Give me my helicopter, tell me what you want done, then get the hell out of my way ’cause I’m gonna to do it.”

Returning to civilian life, and no longer indestructible, Sepesy faced new situations and responsibilities. But, the wounds and scars of war, the physical injuries and PTSD, along with memories and the military way of black-and-white, by-the-book thinking of live or die, presented new challenges and complicated every-day routines. Muddling through the more mundane obstacles of college and home, family and career became another struggle to overcome. During the next three decades, numerous operations plagued the author and the insidious ways of PTSD went undetected—a new journey of survival … and accomplishment, would begin. 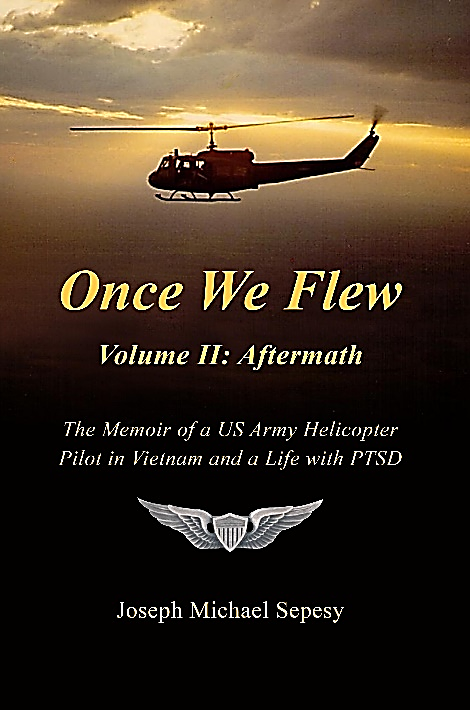 Once We Flew, Volume II: Aftermath, The Memoir of a US Army Helicopter Pilot in Vietnam and a Life with PTSD

Chief Warrant Officer 2 Joe Sepesy is no longer operating as an experienced, capable, and very lucky Huey Aircraft Commander and Flight Lead. At twenty, he was responsible for the lives of dozens of crewmen and soldiers, numerous aircraft, and the completion of combat missions. In Volume II: Aftermath, now, no longer indestructible, private citizen and veteran Sepesy, must face new situations and responsibilities. And so, begins Joe’s second war! 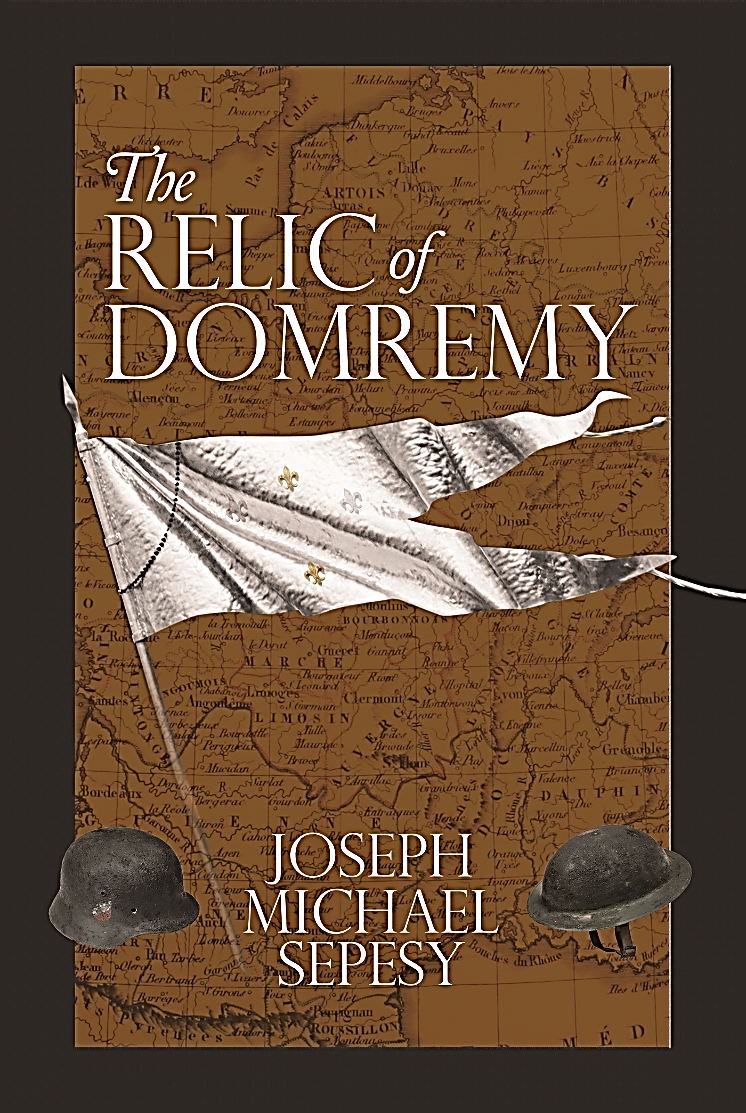 The Relic of Domremy

Nearly five hundred years after the French village of Domremy experienced the horrors of warfare and the brutal death of Saint Joan of Arc, the atrocities of war are once again a reality. United States Army Lieutenant John Chaple is no stranger to trench warfare. The day before the signing of the armistice that ends The Great War, Chaple becomes part of the last battle at Domremy.

After Chaple and Germany Army Captain Otto Dengler become unlikely allies, one discovers the sacred relic of St. Joan inside the ruins of a Domremy church. As the lives of the two enemy officers intertwine through fates that lead them from the Black Forest of Germany to Niagara Falls, each strives to attain salvation and inner peace. But when the randomness of combat combined with soldiers’ flawed actions complicate the officers’ encounters, along with miraculous intervention, one of war’s most profound mysteries is underscored. Who will live and who will die?

In this historical novel, two unlikely allies transporting a sacred relic found during World War I embark on separate journeys of self-discovery. 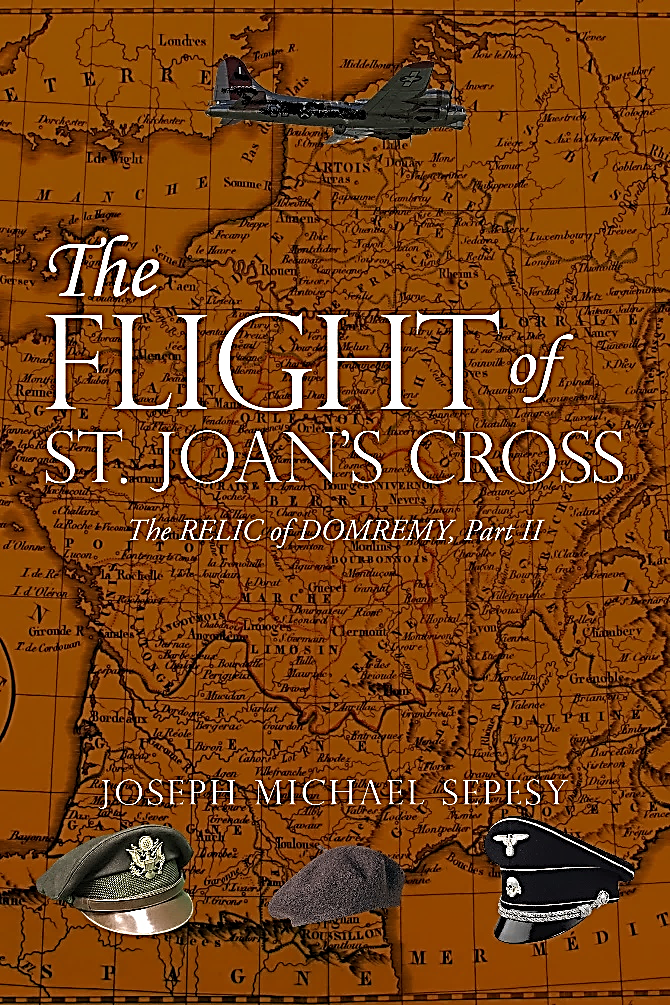 The Flight of St. Joan’s Cross: The Relic of Domremy, Part II

It is 1431, in Rouen, France, when Jeanne d’Arc is burned at the stake. After her Aide-de-camp Captain Paul Lejeune witnesses her death, he saves two pieces of charred wood from the ashes and locks of Joan’s hair. Lejeune then appears before his king and an unexpected tribunal, where political intrigue causes his arrest. After escaping with help from an insider, Lejeune delivers the relics to a priest who, along with his successors, keeps it a secret for over one hundred years until it is displayed at Domremy’s St. Catherine Catholic church.

On 10 November 1918, Lieutenant John Chaple saves the life of German officer Otto Dengler, before dying in a senseless battle at Domremy. Twenty-three years later, Dengler fulfills Chaple’s dying request and visits John’s father to return his personal effects that include the relic of St. Joan of Arc and his journal—just as American soldiers return to battle Nazi forces in Europe. Among them is John’s neighbor, Captain Danny Windemere, who carries the relic with the hope of returning it to the people of Domremy. But first, he must survive twenty-five combat missions flying his B-17.